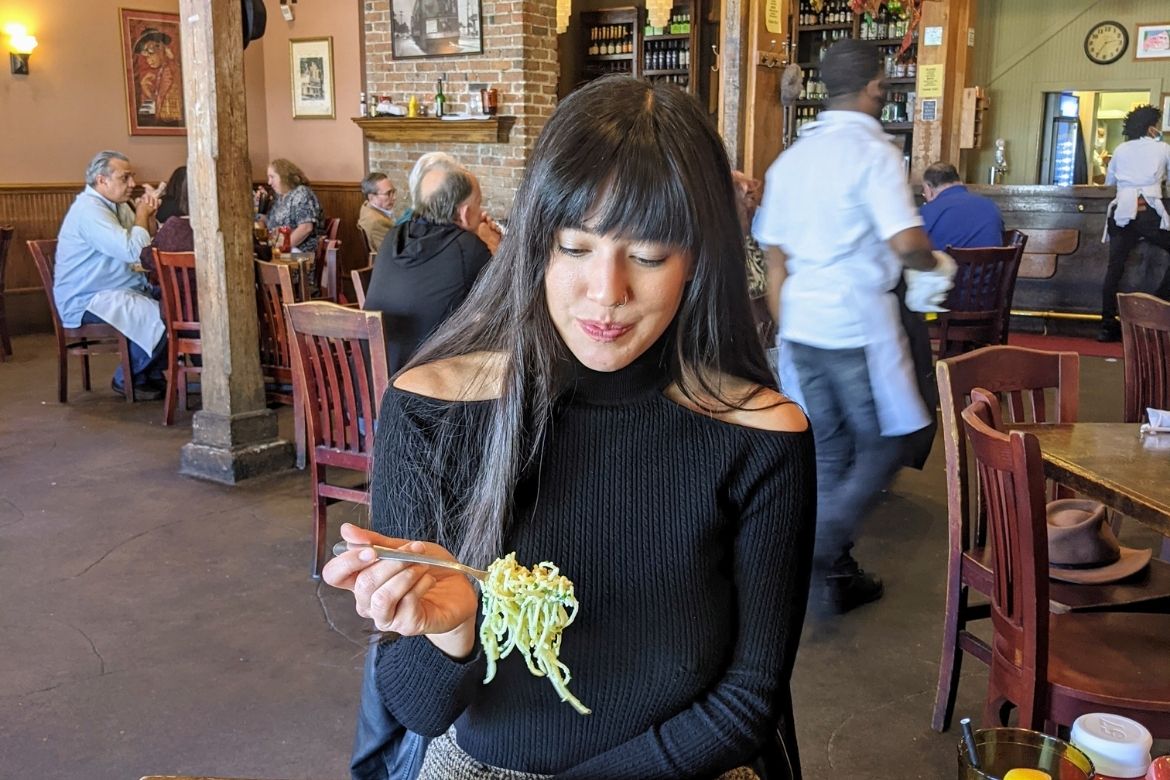 “Things get mixed up in the state of Louisiana…most famously so in New Orleans. Families, bloodlines, food, music — it all went in the soup pot at one point or the other. Until nobody’s really sure who’s who or what’s what or where anybody really came from sometimes.”

Visiting New Orleans is always a pleasure for so many reasons. The city simply oozes culture and character — colorful historic homes, live music around every corner, and incredibly friendly people who are always down to offer a recommendation or have a conversation

And of course, the food, which is what we’re here to talk about today.

If I had to describe New Orleans food in one word, it would be “decadent.” From crispy fried chicken and buttery grits to seafood pasta swimming in olive oil and overflowing po’ boy sandwiches, every meal out is like Thanksgiving dinner.

Loosen your belts a notch and read on for a round-up of the restaurants we visited in New Orleans — most recommended by long-time residents. We ate a lot during our week here, and we’re sharing it all with you today.

Mmm…po’boys. A massive sandwich on flaky French bread, New Orleans style. People get really creative, but the most popular are some variation of fried shrimp and oysters, topped with mayonnaise, lettuce, tomato, and pickles.

Parkway makes a mean po’boy. Try their selection of surf and turf combos smothered in gravy or a classic fried seafood po’boy. So good.

A legendary market and deli in the French Quarter that serves up New Orleans eats until wee hours of the morning, including a scrumptious fried shrimp and oyster po’boy. Anthony Bourdain has eaten here — a PSA for other enthusiasts of his shows like myself!

Gumbo, a thick stew with French and West African roots, is a dish that is as New Orleans as it gets. At Gumbo Shop in the French Quarter, you’ll find tasty variations made with chicken or seafood and friendly staff that are incredibly knowledgeable about New Orleans history and culture. The crawfish étouffée and shrimp creole aren’t half bad either.

Mandina’s has been a New Orleans staple since 1932. When we asked my friends about it, one told us that his grandpa used to eat there, and another told us that it’s her family’s go-to restaurant.

We tried the catfish almandine with fries and grilled shrimp over pasta bordelaise. Both came in heaping plates — delicious and ridiculously rich. Like Thanksgiving dinner, seriously.

Willie Mae’s is one of the most famous restaurants in New Orleans. Anthony Bourdain and many others have filmed here, and for good reason — the fried chicken is damn good. You’ll have to wait in line to get a table, but it’ll be worth it.

A family-owned seafood restaurant with outdoor seating and a great atmosphere. We came here twice for spicy boiled crawfish and the biggest oysters I’d ever eaten.

A colorful, artsy spot in the funky Bywater neighborhood, Elizabeth’s serves an amazing brunch. What you see below on the plate that is significantly larger than my head is poached eggs and hollandaise on top of a bed of home-fried potatoes and giant fried oysters. Oh, and praline-coated millionaire’s bacon next to it.

8. Turkey and the Wolf

Dubbed America’s best new restaurant of 2017 by Bon Appetit, Turkey and the Wolf does a ridiculous take on the classic bologna sandwich. Not my photo, but look at it. JUST LOOK AT IT. Trust me, you want a piece of this.

Mother’s has been serving classic New Orleans food since 1938. We love the gumbo, crawfish étouffée, and jambalaya — and there’s so much more on the menu we still have to try.

For some reason, I never realized that Asian-Southern fusion was a thing, but I’m so happy it is because it is brilliant and freakin’ good. Mopho’s menu blew my mind. Think shrimp and andouille gumbo made with fermented black bean paste, shrimp and grits with curry, and phos with a Southern twist. Rich and comforting like Southern food should be with interesting twists from Asian spices.

A Stinky Tofu Adventure on Shenkeng Old Street in Taipei

Where to Find the Best New Orleans Street...