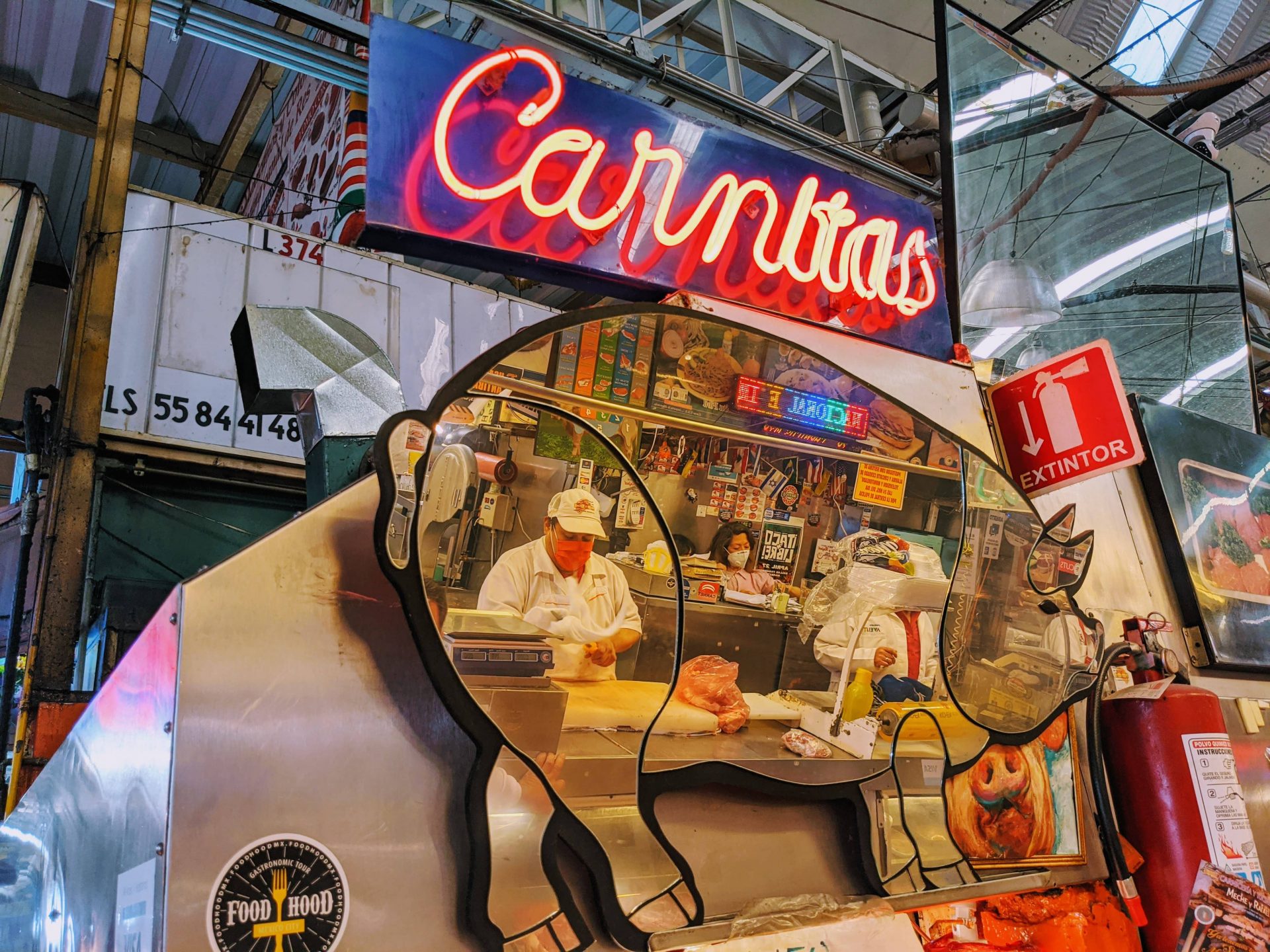 A Brief History of Carnitas (& the Best Carnitas in Mexico City)

Carnitas — arguably the most decadent taco meat in existence — is made by frying every part of the pig you can imagine in its own lard for two-four hours. Read on for a brief history of this indulgent dish and a roundup of the best carnitas tacos we ate in Mexico City.

Ahhh, carnitas. Pork in its most perfect form. Every part of the pig you can imagine braised or simmered in oil — ideally its own lard — for anywhere from two to four hours. The fat between the meat dissolves during the cooking process so when you eat it, it melts in your mouth in a burst of savory goodness that feels like heaven.

You can really play with texture when assembling a carnitas taco, and a good carnitas joint should provide you with options. At Carnitas El Charro in the Coyoacan market, we salivated over the creaminess of pig mouth balanced by chewy-yet-tender pieces of rib meat. Skin from the pig’s forearm rewards you with a fatty, sticky sweetness. A small handful of chicharron adds a satisfying crunch.

Mix and match these textures, add some raw onion, cilantro, salsa, and a pickled vegetable or two and you may just find yourself with the perfect taco. I’m finally starting to understand Anthony Bourdain’s obsession with the 🐷

Fun fact: Pigs are not native to the Americas. Between 1492-1504, Christopher Columbus brought pigs and other farm animals from Spain to the islands of the West Indies. They eventually make their way to Mexico via Hernan Cortes, who transports them from the West Indies to the “New World”.

As folklore goes, in 1521, Hernan Cortes hosts a banquet at his palace in Coyoacan to celebrate the fall of Tenochtitlan and the Aztec Empire. He butchers a pig and cooks it with what’s available — its own lard — then serves it to guests with Tlaxcalan cornbread.

And so carnitas was said to be born. (One more fun fact: Frying as a cooking technique was also unknown in Mexico prior to the arrival of the pinche conquistadors.)

Though this origin story is greeted with skepticism by some historians, it’s undeniable that introducing pork to traditional Mexican corn culture led to some delicious synergies. This theme of Mexican cuisine evolving with the rise and fall of empires — and with the introduction of new ingredients and techniques — is one that we see repeatedly throughout Mexican food history.

Fat as a cooking medium was not known amongst pre-Hispanic groups. Lard from pigs, followed by tallow and butter from bovine and ovine herds, and vegetable oils (such as olive), were introduced to the New World, and that is when the mestizaje of the Spanish and Mexican cuisines embraced frying with a passion.

If we are to believe that carnitas was invented by Hernan Cortes in Mexico City, then it was certainly perfected in the Mexican state of Michoacan. Michoacan is famous across Mexico for its carnitas, and people there have been preparing the dish in their traditional way for generations. When traveling across Mexico, it’s common to see restaurants and street stalls advertising their carnitas with large Michoacan signage. It’s a stamp of authenticity — “the carnitas here are the real deal.”

The Michoacan technique for cooking carnitas starts with a copper pot, said to better conduct heat for even cooking, ultimately giving the carnitas a more intense flavor. There are ongoing arguments amongst chefs over the merits of cooking carnitas in a copper pot vs. a steel pot. Copper pots represent tradition, while steel represents modernity.

The ingredients to Michoacan carnitas are surprisingly simple — all you need is fresh pork, lard, salt, and water. The complexity of the dish comes from the chefs’ mastery of heat and the order in which pig parts are cooked. Different temperatures are used at different stages of cooking, and leaner, tougher parts of the meat are cooked first to ensure the perfect consistency.

The final product is golden-brown chunks of pork that are crispy on the outside and moist and tender inside.

“For those of us who live in Michoacan, eating a carnitas taco means indulging in a sinful pleasure. And it’s comforting. That sweet flavor of carnitas, the pork’s juicy texture, is something we really like.”

The Best Carnitas Tacos We Ate in Mexico City

If you can’t make it to Michoacan on your trip to Mexico, these Mexico City carnitas joints will help curb your cravings.

Carnitas El Charro is a family-run business that has been serving carnitas since 1956. During the week, you can eat delicious carnitas tacos at their humble stall within Coyoacán Market. On the weekends, the operation expands into a full-on carnitas fiesta involving the whole family.

If you can, check out Carnitas “El Charro” on a Saturday or Sunday. We had one of our most fun (and tasty!) meals there during our two weeks in Mexico City.

Carnitas Meche y Rafael serves up scrumptious carnitas in Mercado Medellin. Not only is the meat tender and flavorful, the stall uses a mix of onion and epazote (an herb native to Latin America that tastes like a slightly bitter mint) in their fluffy tortillas. A unique combination I have not seen anywhere else.

Rincon Tarasco is a popular, no-frills joint serving traditional carnitas in the Escandón neighborhood. Make sure to get here early! We tried going at 3 PM and they were all sold out.

Carnitas Quiroga is the definition of a delicious hole-in-the-wall. The tacos here — at 20 pesos ($1) apiece — are extremely generous and filling. I tried a costilla (rib meat) taco and it was stuffed to the brim. An affordable gem in the otherwise pricey Condesa neighborhood.

Carnitas Garcia is a recommendation from our friend Luis, a Mexico City native, who has never led us astray when it comes to delicious food. It is not a restaurant, but a street stall near his mother’s house that has been there for 50 years at least. It is only open on the weekends, and the best time to go is at noon. Otherwise, it’s likely that the carnitas will already be finished.

Carnitas Luna Park is another recommendation from our friend Miguel who has been living in Mexico City for 13 years. Carnitas Luna Park has been in the Juarez neighborhood since 1938, and the restaurant is always crowded with locals looking for rich, fried pork bits. They also have a tasty selection of salsa and sauces.

The Ultimate Guide to Eating Your Way Through Tlacolula Market

The Ultimate Guide to Starting a Travel Vlog...

Where to Eat in Mexico City: Best Restaurants,...

How to Make Chinese Hot Pot at Home...

The Ultimate Guide to Eating Your Way Through... 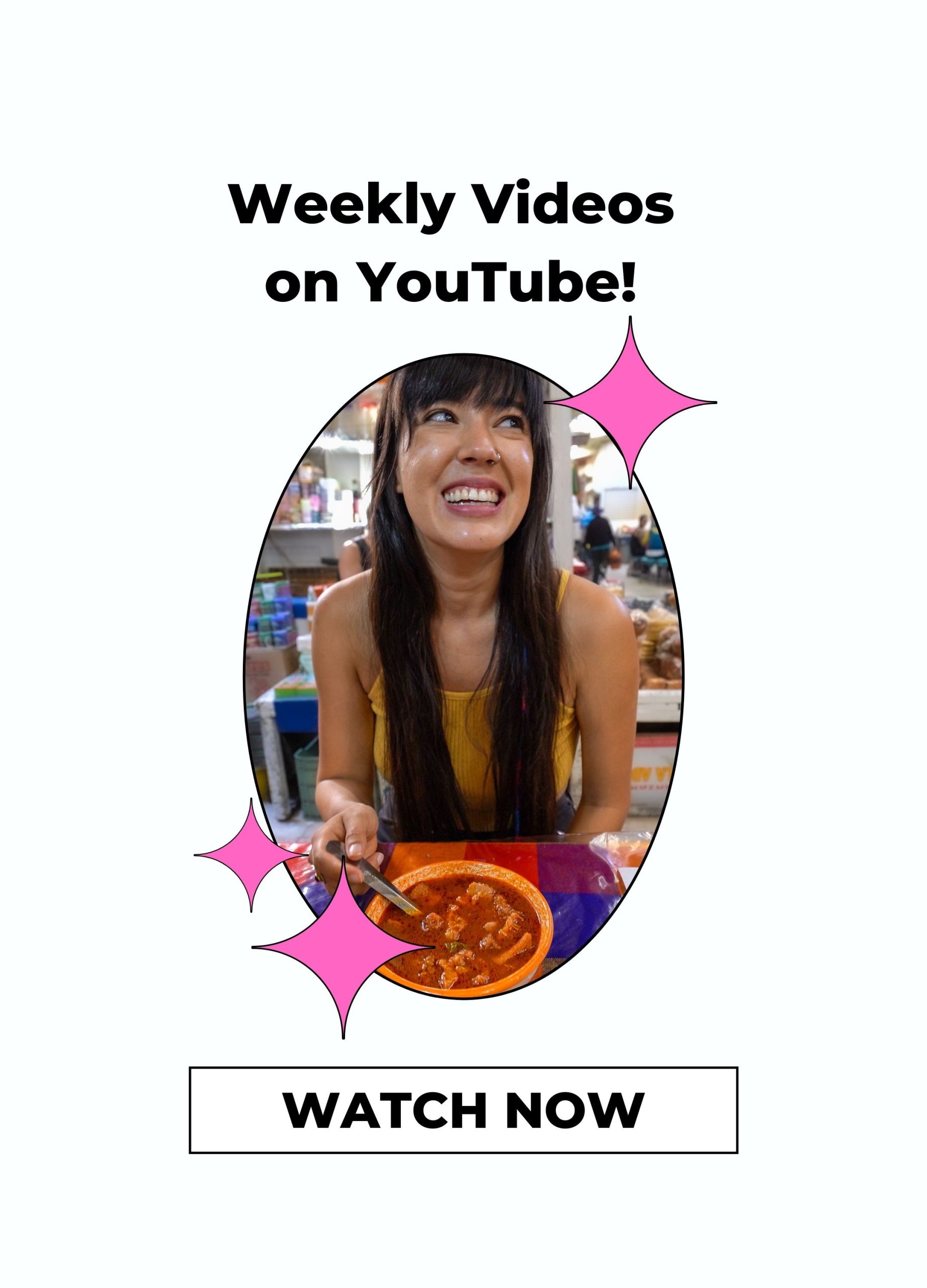