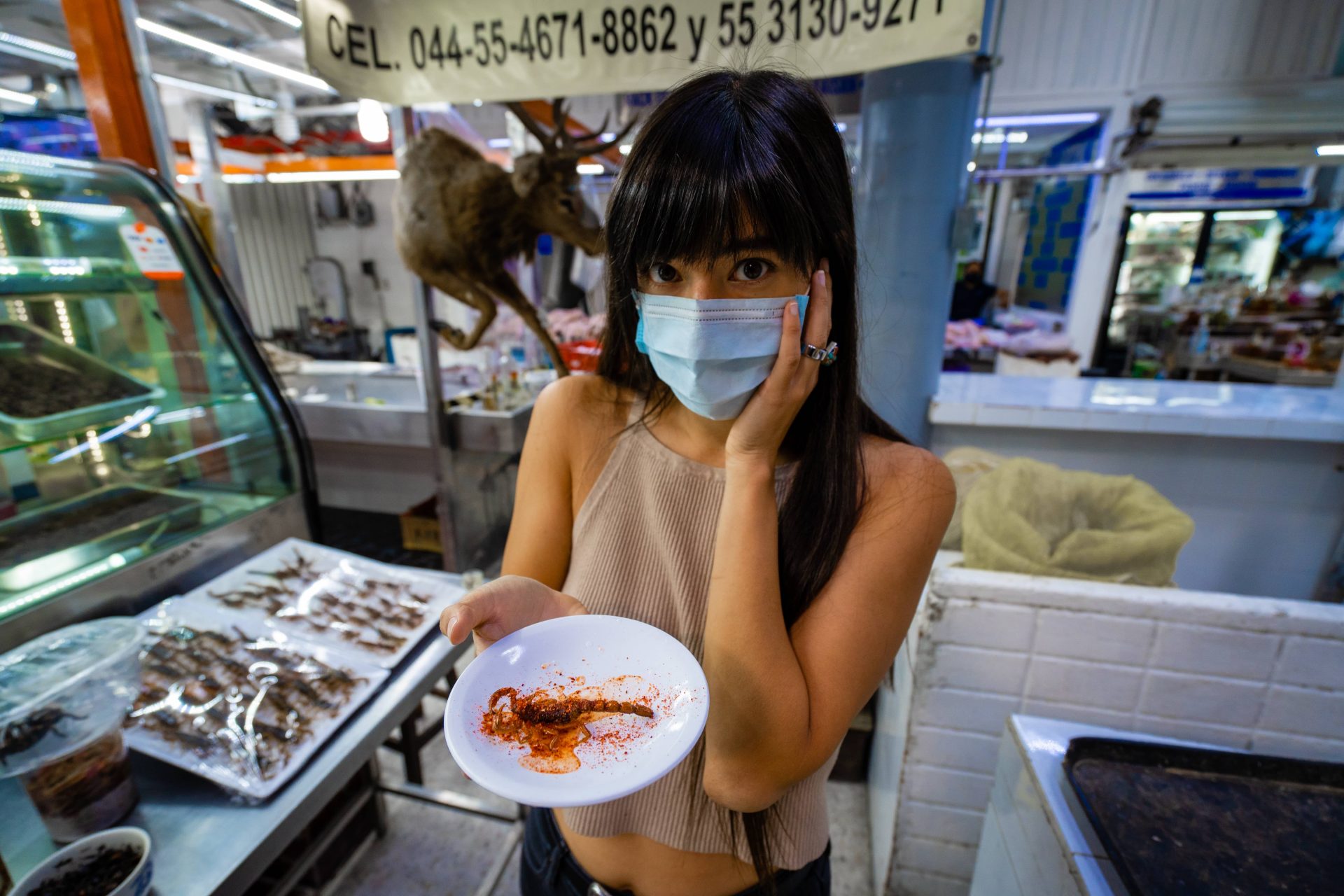 Mercado de San Juan, or San Juan Market, is one of the most famous markets in Mexico City. For both it’s gourmet and more…shall we say…exotic offerings.

In Mexico City alone, there are over 300 markets, and Mercado de San Juan — which we’ll give you an up-close look at in this post — is one of the most famous and a favorite of food enthusiasts across the city.

“Mexico is in its markets.”

It’s not hard to see why. Entering the market rewards you with aisle upon aisle of beautiful produce, fresh seafood, meats, international ingredients, and…scorpions?⁠
⁠
Yup! You read that right.

While Mercado de San Juan is first and foremost a gourmet food destination, it is also notorious for its more…shall we say…exotic offerings.

Venture deeper into the market, past the innocent fruits and vegetables, and you’ll find an assortment of edible creepy crawlies and unusual meats — think lion, ostrich, bear, and crocodile. And the butcher section may well be a vegetarian’s worst nightmare.

Read on for our full experience at the market, which involves a food tour that started with pure intentions yet ends with a Bizarre-Foods-style twist.

If you’re an adventurous eater, you’re going to like this one!

A Market for Chefs & Foodies

Built in 1955 on the former space of the Buen Tono cigarette warehouse and officially titled Mercado de San Juan Ernesto Pugibet after the land’s former owner, the building is one of the oldest municipal markets in Mexico City, and its common name comes from the nearby San Juan Plaza, where food vendors sold their wares beginning in the early 1900s.

Mercado de San Juan is known as a chef’s market. Towers of colorful fruits and vegetables (from Mexico and imported from all around the world), European cured meats and cheeses, a scary but gourmet selection of fresh meat, seafood from Mexico and beyond, and more unique finds like ostrich eggs and edible flowers.

The goods here are more expensive than you’ll find elsewhere, but you get what you pay for. Lucky for those of us from the States, things are still affordable. The same quality of products in San Francisco, where we live, would be 4-5x the price.

We went home with an exquisite leg of lamb to cook for Thanksgiving for around $15 USD. If you’re feeling extra, you can even pick up a whole baby pig for $25 USD.

Would you eat a scorpion? How about a cockroach? These are the existential questions you may find yourself asking when walking through Mercado de San Juan.

In the weeds of the market, you’ll find vendors selling scorpions, tarantulas, cockroaches, ants, and other edible creepy crawlies. I may or may not have been roped into trying a fried scorpion doused in chili powder, followed by a shot of mezcal.

Baby was also peer pressured into trying her very first Madagascar cockroach, and she is still super traumatized from the experience! (Eating a cockroach would make you talk in the third-person too 😭)⁠

Lions and Tigers and Bears — Oh My!

Mercado de San Juan is known as a place to get exotic meats. Many vendors advertise iguana, wild boar, armadillo, and crocodile on their menus. If you’re feeling brave, you can opt for a lion burger or tiger steak.

Vendors have been selling these scarce meats in the market for some time, and they are apparently raised legally on farms in Puebla and Guerrero.

At Mercado de San Juan, you’ll find European cured meats and cheeses, produce from around the world, and international food products on top of standard market fare. It’s one of the few places in Mexico City where you’ll find Asian food products, for example, and vegetables like bok choy and Chinese cabbage.

The butcher section of Mercado de San Juan is pretty metal. In the back of the market, under fluorescent lights, you’ll walk past whole baby goats, pigs, and hares lined in rows, stacked in towers, or packed into crates. I even found a bag of goat heads…mmm.

Though it’s a lot to take in visually, the meats are incredibly high-quality and much of it is farm-raised. There are more conventional cuts too, of course. Really exciting stuff for cooks.

The produce in Mercado de San Juan is a dream. Vendors preside over their colorful towers of fruits and vegetables taller than you, occasionally offering you samples as you walk by.

If you’re American, forget about what you think fruit tastes like. The fruit here is incredibly ripe and sweet — anything but bland and absolutely delicious.

Mercado de San Juan is the place to get fresh seafood of the highest quality. From giant prawns and shellfish to octopus and tuna cut right from the source, the selection is just ridiculous.

Much of the seafood sold in the market is from Veracruz, but you can also find catch from around Central and South America.

What & Where to Eat

For a sit-down meal in the market, we kept finding ourselves at Las Tapas de San Juan, a stall specializing in meat-and-cheese stuffed paninis. Though the food is mostly European-inspired, there are a medley of homemade Mexican house sauces that you can slop on your food for an extra sweet or spicy kick.

The best part? Order one panini and you get a glass of wine, a meat and cheese plate, and dessert for free. We went back three times during our two-week trip in Mexico City.

But you really should eat everything!

Sample all the fresh fruit, go to the seafood vendors and ask for fresh tuna sashimi. Try European cured meats and cheeses. If you’re feeling brave, order an exotic meat taco or burger. Hell, eat a scorpion or cockroach.

Whatever you do, you can’t really go wrong.

15 of the Best Things to Do in Oaxaca

A Stinky Tofu Adventure on Shenkeng Old Street in Taipei

Learnings From Five Months of Travel Blogging While...

A Brief History of Carnitas (& Where to...